For nuclear power, security is undoubtedly the most concerned. As the representative of China's third generation nuclear power autonomy, what are the advantages of CAP1400 in terms of safety? "The most serious in history." This is the most appropriate term to describe the NNSA's safety review of the CAP1400. According to Zheng Mingguang, chief designer of CAP1400, in order to fully ensure the safety, the depth and scope of the review conducted by NNSA on CAP1400 are unprecedented. Nearly 300 experts from all aspects of the industry carried out the most extensive and deepest security review of CAP1400 in history.

State Power Investment Group recently released a message that the Bureau of Nuclear Energy, National Energy Administration Liu Baohua recently went to Shanghai to investigate "large advanced PWR nuclear power plant" implementation said that CAP1400 is China's nuclear power from "big country" to "power" symbol In particular, in the aspect of autonomy and localization, China has rid itself of being dominated by the nuclear power industry in China and set up a brand new platform for China's nuclear power.

According to the above news, on February 23, Wang Zhigang and Liu Baohua, Party Secretaries and Deputy Ministers of the Ministry of Science and Technology and his party went to the Shanghai Institute of Nuclear Science and Technology to investigate the implementation of the "Major Advanced PWR Nuclear Power Station" under the state's major project. During the period, Liu Baohua made the above statement.

Liu Baohua also affirmed the accurate, well-organized, well-prepared and comprehensive preparation for major projects of pressurized water reactors. The depth of design and progress of equipment development have all contributed to a systematic leap forward in China's nuclear power industry. "

Code-named CAP1400 is a large-scale advanced PWR nuclear power plant (also known as "PWR Major Special Demonstration Project"), where "C" is the first letter of the word "China" and "A" and "P" Advanced "and" passive "English words, CAP1400 means the advanced non-active nuclear power technology with an installed capacity of 1.4 million kilowatts in China.

Not long ago in an interview with the media, CAP1400 project advanced technology, safety and economy of the overall plan and chief designer of Shanghai Nuclear Engineering Research and Design Institute Zheng Mingguang said CAP1400 development based on AP1000, enhanced security design capabilities, Its safety is in the leading position in the world and reaches the current highest safety goal.

In carrying out the top-level design, the CAP1400 must meet the latest safety regulations and standards in China and the world in terms of safety requirements to meet the most stringent environmental emission requirements and meet the social development needs and public concerns for some time to come. The CAP1400 is designed to combat the impact of commercial large aircraft on its own against major floods, storms, and earthquakes and comprehensively enhance the coping ability of over-design-based accidents.

In terms of safety design, the CAP1400 provides in-depth safety defense concepts, adequate safety design margin, highly reliable nuclear power equipment, simplified and ergonomic system layout to ensure the safety of reactor facilities and radioactive barriers. The CAP1400 is fully engineered and tested for design innovation and improvement. The current safety design ensures unacceptable environmental, social, and public safety in the event of an anomaly or even a serious accident.

In addition, Zheng Mingguang also said that under the premise of ensuring safety, economy is the most important factor in the construction of nuclear power plants, which is very important for the future promotion and "going global" of CAP1400. The first batch of units is expected to have a construction period of 56 months. After the subsequent equipment manufacturing and project management mode are mature, the construction period of the batch units can be shortened to 48 months; simple and flexible operation, less spare parts for safety equipment and short maintenance and inspection time, these characteristics have determined CAP1400 has superior economy and competitiveness.

At present, the demonstration power station built in China is located at the site of Rongcheng Shidao Bay in Weihai City, Shandong Province. It is planned to build 2 CAP1400 PWR nuclear power units with a designed life of 60 years and a stand-alone capacity of 1.4 million kilowatts.

It is reported that before Wang Zhigang and Liu Baohua went to Shanghai for investigation and study, on February 17, the "National Energy Administration's Notice on Issuing the Guidance Opinions for 2017 Energy Work" released by the National Energy Administration shows that during the year China plans to build five units such as Sanmen Unit 1 Nuclear power projects, started eight.

If nothing else, the above CAP1400 nuclear power plant located in Rongcheng Shidao Bay, Weihai City, Shandong Province is expected to start construction during the year.

State Power Investment said the news quoted Yu Jianfeng, vice president of the company as saying that major projects CAP1400 has passed the safety review organized by the State Nuclear Safety Administration and the International Atomic Energy Agency General Reactor Safety Review, in line with national and international laws and regulations standards, autonomy Development of key equipment such as fuel, main pump and digital instrumentation system went smoothly and major equipment of long cycle was put in place in advance. All preparations for the site were ready and fully equipped with conditions for commencement of operation. (Reporter Lin Chun Ting)


Waste heat recovery equipment is a kind of metal plate heat exchanger, where the air pass

through and exchange energy(heat-recovering system and exhaust heat recovery system). It can separate fresh air and exhaust air completely, avoided

any solvent transmission. The two air cross and counter flow to the exchanger, then fresh

air and exhaust air exchange energy through the metal plate, 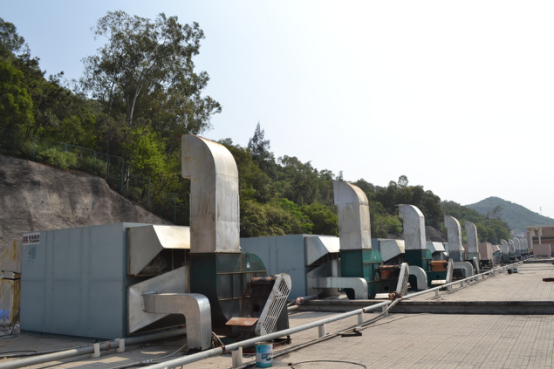