First, production has grown steadily and rapidly. Monthly statistics for January-June showed that the growth rate of total industrial output value and sales value of the enterprises above designated size in the general machinery industry continued to grow rapidly and steadily in the first six months of this year. The year-on-year growth rate of production in the first five months of this year was the same as the same period of last year. 2-3%, the year-on-year growth rate in June decreased slightly, falling 0.07 percentage points;

Third, the growth rate of the growth rate of the main industry product production year-on-year slowed down. From January to June, statistics on the production of major products of the industry showed that the output of pumps, gas compressors, valves, transmissions, and separating machines increased by double digits year-on-year, but the year-on-year growth rate of various industries decreased month by month from the same period of last year. Among them, the fan industry's year-on-year increase of 51 percentage points was mainly due to the fact that Shanghai, Zhejiang Province, and Guangdong Province accounted for 80% of the total output of the wind turbine industry, and the cumulative increase of 42% year-on-year in June 2007. In June, the cumulative increase was -20.96% year-on-year, and the output of wind turbines grew negatively in 10 of the 28 provinces, cities and counties. The year-on-year growth of the separation machinery production showed a growth of 116.69% because the Shandong region completed 9490 separating machines in June, which accounted for 49.55% of the total in the whole industry from January to June. The year-on-year increase was 851.17%, and the incomparable adjustment factor increased year-on-year. 19.96%.

From the above data and analysis, it can be seen that the increase in production, sales, and profit of the general machinery industry is higher than the increase in the physical quantity of the product, which indicates that the overall competitiveness of the industry is constantly increasing, and in recent years, the production technology and equipment of the company has been updated and the product structure has been optimized and upgraded. The companyâ€™s production capacity, technical equipment, and product competitiveness will be improved, and the strength of the dominant companies will gradually emerge. The homogenous competition in the industry is still serious, resulting in an increase in loss levels and losses under rapid growth. With the rise of iron ore prices will also trigger a new round of steel prices, the industry will face the test of a new round of steel price increases in the second half of this year, mature products bear the price increase ability is weak, it is difficult to pass down Or to digest the price increase by itself, it is urgently necessary to accelerate the upgrading of the industrial structure and the transformation of the growth mode.

The macro-control measures adopted by the country in the second half of 2008 will gradually appear, and the growth of the industry will slow down. As the country's domestic demand is very good and the company's ordering tasks are full, the industrial production and sales in the second half of the year will still maintain a growth rate of around 30%.

The most commonly seen Lift Platform is the scissor lift. Scissor lift platform is a kind of multifunctional aerial working lift platform fitted on fixed bases and movable bases i.e. rubber tire vehicle. We have various types of lifting platforms with features of light weight, big capacity, self-propelled, electric starting, self-supported, large working range and simple operation, which can carry out 360 degree aerial work crossing obstacles. Each type of lifting platform can be equipped with an outreach support which can extend 800mm to 1000mm.

Weihua is a China leading lifting equipment manufacturer with 31 years experience. You can find our products all over China, also in 110 countries such as the UK, Russia, USA, Thailand, Ukraine, Egypt, Mexico, Pakistan, Malaysia, etc. We have confidence to provide you with the right products and professional solutions. Just let us know your needs. 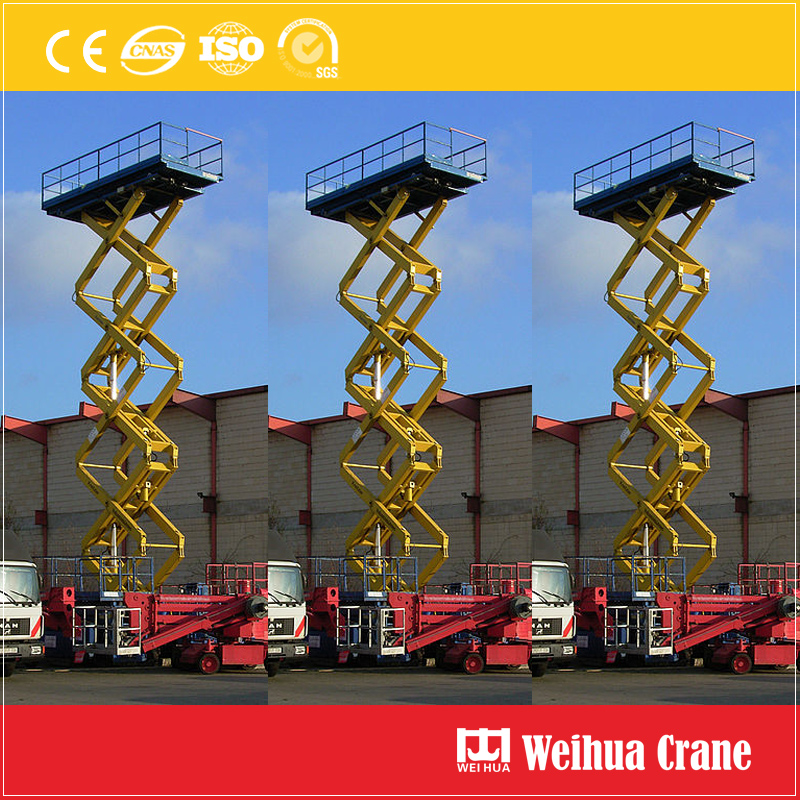