On April 10th, the opening ceremony of the 2018 annual meeting of the Boao Forum for Asia announced a series of new measures for expanding China's opening up, including the relaxation of foreign shareholding restrictions as soon as possible, especially the restrictions on foreign investment in the auto industry and the reduction of import tariffs.

The drop in the price of imported vehicles will certainly threaten the joint venture and self-owned brands at the same level. In this regard, reducing prices and improving product quality will be necessary measures. In the long run, the new measures will affect the entire automobile industry.

In this issue of smart internal reference, we recommend the auto industry analysis report of Northeast Securities and the joint stocks of Minsheng Securities to release the trend analysis. With the observation of the market, we analyze the influence of stocks on the joint ventures and reduce the tariffs on imported automobiles. Analysis of the possible impact of various levels of car prices. If you want to collect the full report of this article (Northeast Securities: structural impact of the import tariff cuts may bring; Minsheng Securities - joint venture shares than the trend is the trend of equal opportunity strength is the key), you can in the wisdom things (public number: zhidxcom) Reply to keyword "nc245" to download.

The following is a summary of the dry goods presented by the smart internal reference:

The Boao Forum for the 40th Anniversary of Reform and Opening-up attracted much attention. In his speech at the opening ceremony of the Boao Forum in 2018, President Xi announced a series of major measures to expand the opening up, which is heartening. The main initiatives include:

1. Broadening market access, especially in the financial and automotive sectors, will further relax the proportion of foreign ownership.

3. The third is to strengthen the protection of intellectual property rights, reconstruct the State Intellectual Property Office, and accelerate the accession to the WTO "Government Procurement Agreement."

4. Take the initiative to expand imports, reduce tariffs on automobiles and other commodities, and hope that other countries will relax restrictions on the export of high-tech products to China.

5. To propose the construction of a free trade port with Chinese characteristics.

Above, new measures to further open up the automobile field will be mainly reflected in two aspects: First, the restrictions on the proportion of shares held by foreign investors will be relaxed, and second, the import tariffs on automobiles will be lowered.

â–² Musk is dissatisfied with the "unequal" rule of Sino-U.S. auto trade

In fact, it was rumored that Tesla's heated construction in Shanghai had been set aside because of restrictions on foreign-invested companies. According to the existing â€œForeign Investment Catalogâ€, Chinaâ€™s stock ratio is not less than 50% in the manufacture of automobiles and special vehicles. The same foreign company can establish two or less joint ventures in China to produce the same vehicle products (passenger cars, commercial vehicles) in China. For example, joint ventures with Chinese partner companies to establish pure electric vehicle vehicles can be established. Subject to two restrictions. 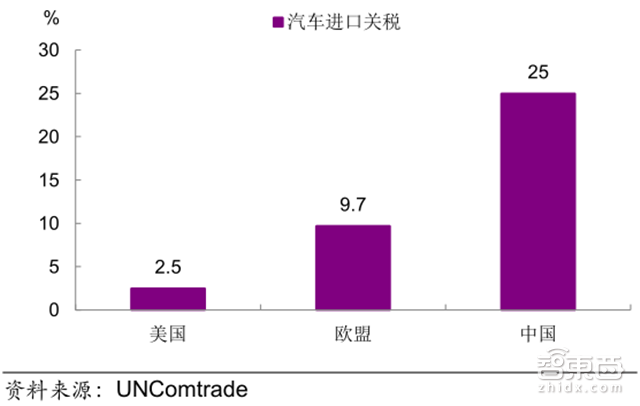 On the other hand, compared with other countries, the import duties of some industries in China are still relatively high, such as food, animal and vegetable oils, machinery, and transportation equipment. Among them, the automobile import tariff is as high as 25%, which is significantly higher than the 9.7% in the EU and 2.5% in the United States (However, India, Argentina, and Mexico are 60%, 35%, and 33% respectively).

Therefore, on the whole, tariff cuts are definitely a major trend. The relevant person in charge of the Ministry of Finance also said on the 11th that it will step up a specific plan for tax reduction and strive for early implementation. 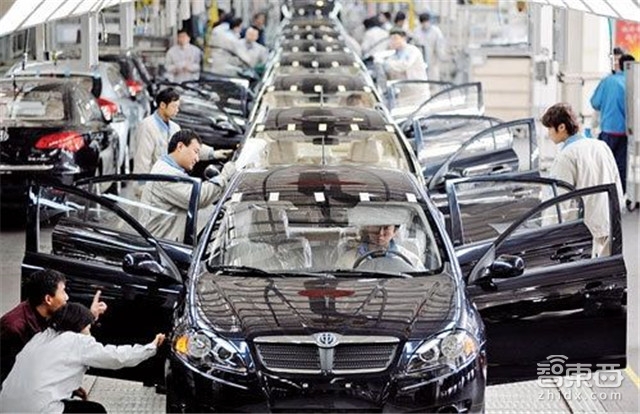 In the past few decades, although China's auto industry has witnessed rapid development, autonomously-manufactured models are still dominated by low-end models. Technological research and development and brand effects are insufficient, and they are still at a disadvantage in competition with foreign counterparts.

In the context of current consumer upgrades, consumer demand for low-end models continues to decline. If you liberalize foreign ownership and reduce tariffs, it may lead to a squeeze on the market share of local car companies. However, in the long run, more intense competition can encourage local companies to innovate continuously, which is conducive to the healthy development of independent brands. 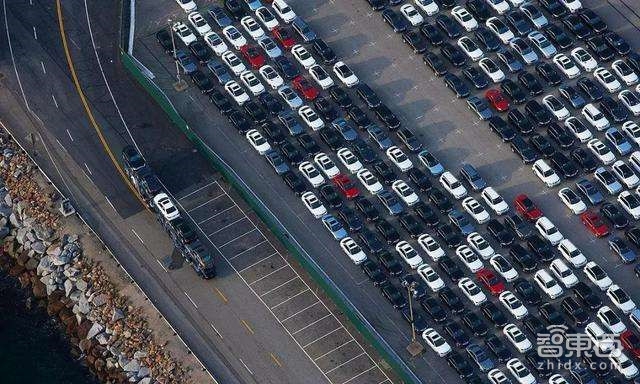 Oh, yes, the "Time Bureau" column of the People's Daily client said: "The new measures to expand China's opening up will benefit many trading partners, but it will not apply to those countries that violate the rules of the WTO and frequently launch trade wars against other countries. !â€

In the Sino-U.S. trade frictions of the previous few days, China once stated that it would impose a 25% tariff on the cars produced in the United States on the basis of the original tariff (up to 50% in total). However, Northeast Securities believes that this is a demonstrative measure and the probability that it will eventually occur and continue is small.

Shares in the joint venture are more open than in the past: 2030

The relaxation of the auto market access conditions is mainly due to the liberalization of the joint equity ratio. The current 50:50 joint venture stocks in China have been implemented for more than 20 years, and openness has always been the trend. 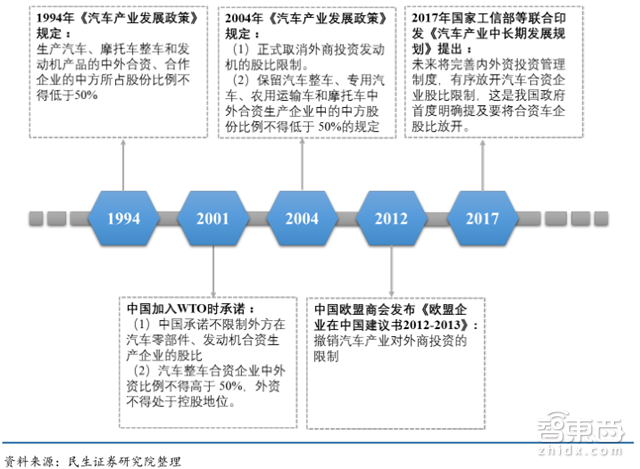 In 1994, the Automobile Industry Development Policy first proposed that foreign companies should not invest more than 50% of the total vehicle industry in China; when entering the WTO in 2000, there was no clear time for the joint venture in the entire automobile industry to be liberalized, but only the place was liberalized. The government approves the rights of the joint venture.

In 2017, the Ministry of Industry and Information Technology of the People's Republic of China issued the "Mid-term and Long-term Development Plan for the Automotive Industry", stating that in the future, the domestic and foreign investment management system will be improved and the equity ratio of auto joint ventures will be liberalized in an orderly manner. This is the first time that the Chinese government explicitly mentioned that The shares of joint venture companies were released.

However, the opening of the stock market today has a limited impact on the industry.

On the one hand, Chinese and foreign companies in existing joint ventures have a strong cooperative relationship: foreign parties provide products and technical standards, while China provides support in terms of government relations, marketing, and production qualifications.

On the other hand, the major auto enterprises joint venture agreement is generally 10-30 years, most of the joint venture cooperation agreement will expire in 2030 or so, the establishment of the earliest FAW-Volkswagen, Shanghai Volkswagen has been renewed. 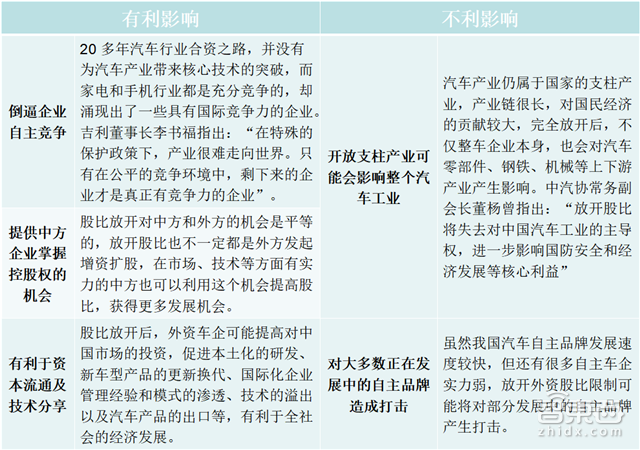 Behind the equity ratio policy is the comparison of corporate strength. Due to restrictions on the duration of the cooperation agreement and the qualification of vehicle production, Minsheng Securities expects that if it is liberalized, it will first of all be changes in the cooperation model at the capital level, followed by changes in business operations such as production, sales, and product R&D.

Tariff reduction: Geometry of cars at all levels 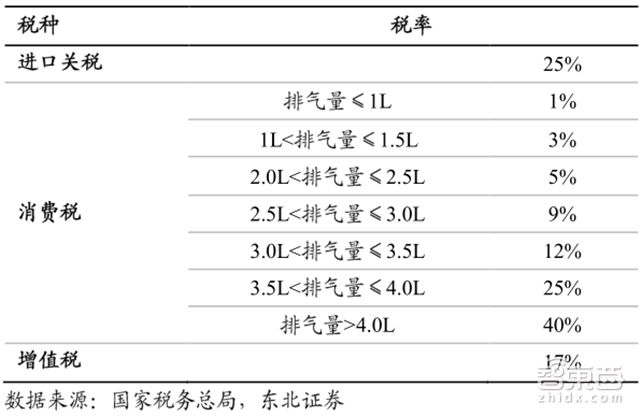 In 1986, China imposed a combination of tariff and import adjustment tax, followed by nine adjustments to automobile import tariffs. The tax rate dropped from 220% in 1986 to the current 25%. These measures directly promote the rapid development of imported cars in China. Data show that in 2001 China's auto imports amounted to 72,000 vehicles. In 2017, China's imported vehicles sold 1.25 million vehicles. 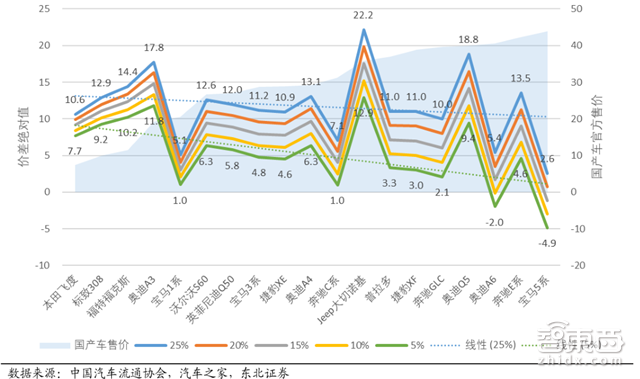 With the current tariff rate of 25%, the relationship between the model price difference and the vehicle grade level is not particularly large, and the difference between most imported vehicles and domestic vehicles is in the range of 10-15 million.

Considering that the current manufacturers of B-class vehicles are mostly joint-venture brands, the profit margin may be slightly affected, and the influence of self-owned brands (A-class vehicles as the main model) is relatively small. 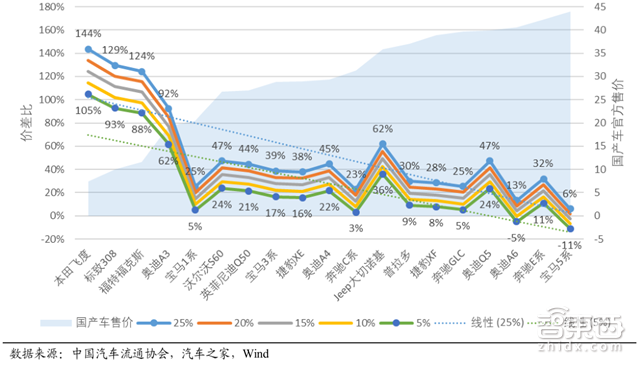 In addition, Northeast Securities pointed out that the same spread has different effects on different original selling price models, so the tariff adjustment cannot be understood simply by the absolute value of the spread. If we define the spread ratio, ie (import vehicle price - domestic vehicle price)/domestic vehicle price, we can quantitatively analyze the structural impact of tariff reduction on the auto industry.

From this point of view, for A-class vehicles, although the spread ratio has decreased with the tariff reduction, the absolute value is still large (mostly more than 60%), so the direct impact of the tariff reduction is relatively small. The A-class car is currently the main model of domestic brands.

For Class B vehicles, the spread of most B-class vehicles has been reduced from about 40% to about 20% under a 5% tariff. Of course, the spread ratio still exists, and some customers who were originally prepared to buy domestic B-class cars may instead buy imported cars.

For C-class vehicles, the 5% tariff rate will achieve an average spread ratio of nearly 0%. About half of the users who originally intended to buy domestic C-class vehicles will turn to imported cars, and half of the customers will have longer wheelbases. The preference may continue to choose the domestic C-Class. 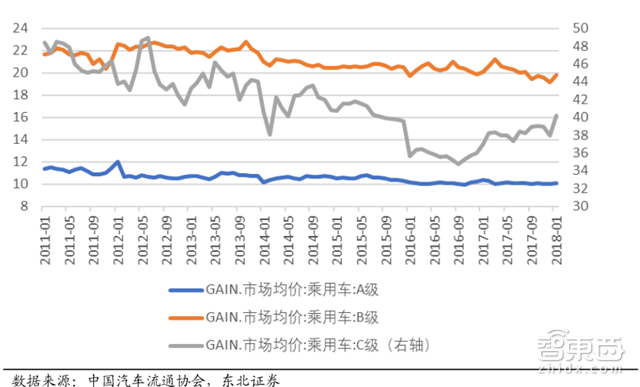 In other words, for passenger car buyers, the lowering price of the C-class car is bound to have a squeezing effect on the B-class car. Customers with strong purchasing power in Class B cars may choose to buy C-Class cars, and the decline in sales of Class B cars will inevitably lead to price/profit cuts. Northeast Securities analysis pointed out that the average monthly price of C-class vehicles fell by 1 yuan, the average price of B-class vehicles will fall by 0.17 yuan.

In the same way, the price reduction of B-class cars will also affect A-class vehicles. The linear fitting shows that the monthly average price of a Class B car changes by 1 yuan per month, and the A-class car changes by 0.39 yuan in the same month.

â–² Dependency relationship between monthly average market prices for passenger cars of class A, B and C

Wisdom believes that expanding the opening up of the auto industry is consistent with our country's deployment. Joint ventures have become a trend to open up and import tariffs have been lowered. For automobile companies, this means a more competitive environment; for auto parts companies, this means capital and technology opportunities; for consumers, this means more cost-effective imported and domestic cars. product.