Pirelli employs 37,500 people in 160 countries and territories around the world. It has 19 plants worldwide, 72 million tires/year of passenger car tires and 6.3 million industrial tires/year. 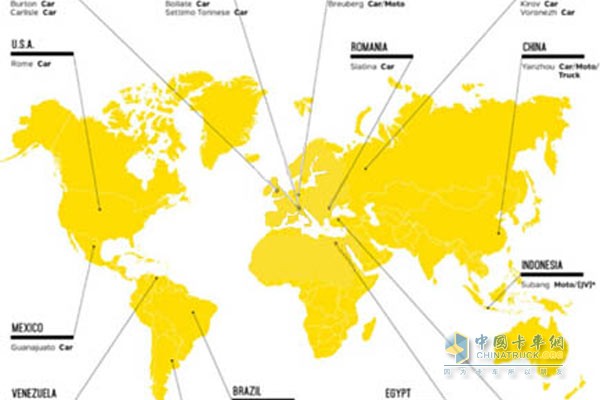 About one-third of Pirelliâ€™s sales revenue comes from Europe, one-third from Latin America, and the remaining countries and regions account for 1/3. In 2014, Pirelliâ€™s net profit was 330 million euros, and its net profit rate was 5.5%.

Pirelli is known for its top-level technical strength in the tire industry, focusing on the research and development of ultra-high performance tires and leading the design trend of the global tire industry.

In 2014, Pirelli became the sole tire supplier for Formula One races, demonstrating its R&D strength in the global tire industry.

Pirelli focuses on the high-end tire market. Although its sales revenue is not ranked in the first tier, its brand is the top brand in the global tire industry. It has been awarded to high-end automakers such as Mercedes, BMW, Audi and Bentley, Maserati, Ferrari and other luxury goods. The car manufacturers generally recognized as their supplier of tires.

In addition to Aeolus shares, China National Chemical Group also has three other wholly-owned subsidiary tires, which are located in Qingdao, Taiyuan and Guilin. They have a capacity of 4 million pieces of truck tires per year and 100,000 pieces of construction machinery tires.

Among them, Guilin Torch tires can produce giant all-steel radial tires, which is a high-tech product that breaks the monopoly of Michelin and Bridgestone and fills domestic gaps.

In order to solve the problem of competition in the same industry, in June 2014, Fengshen shares announced the "announcement on the company's controlling shareholders to further clarify commitments," China National Chemical Corporation promised to integrate its tire assets with Aeolus shares as a platform.

The Rubber Professional Committee of the China Chemical Society, which is based at North Oaks, is a member of the International Rubber Conference.

Although China National Chemical Industry Group has not publicly stated that it would integrate the two research institutes with tire assets, its tires professional R&D capabilities and industry standard formulation, quality monitoring, and product certification functions also have important strategies with tire assets. Collaboration has the advantage that other manufacturers in the domestic tire industry do not have.

China National Chemical Corporation has completed the acquisition of Pirelli tires in Italy at the end of 2015. The integration work has been rapidly carried out in various aspects such as technology, management, and marketing.

Pirelli will first integrate with China National Chemical Group's domestic non-listed tire assets, and then use Aeolus shares platform to land on the domestic capital market.

With the integration of Pirelli and Aeolus, the world-class brands plus China's low-cost manufacturing advantages will relocate the global tire industry. Just as Lenovo bought THINKPAD a decade ago, it became the global leader in the PC industry.

Best quality , best service, only for your personal private customization.